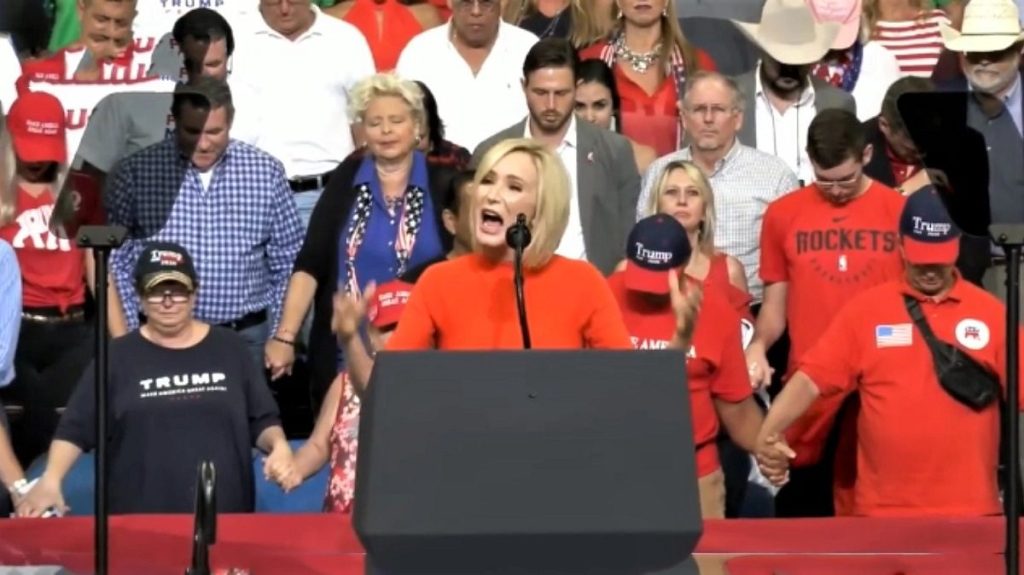 Go ahead and watch the video, and let’s dive into her prayer together.

She quotes a lot of Scripture throughout her prayer, or at least throws out a bunch of Bible verses for reference points. Now, I don’t have any problem praying for our president; we pray for him in our congregation every Sunday, just as we did for Obama when he was in office. But she isn’t just petitioning for God to guide our temporal leader in wisdom and understanding and for protection of the church. Oh no, this lady goes to a whole new level.

She quotes a quick succession of Psalms to create the image of Trump’s role in our age, punctuated with Psalm 2:1-4, which reads,

Why do the nations conspire

and the peoples plot in vain?

The kings of the earth rise up

and the rulers band together

against the Lord and against his anointed, saying,

“Let us break their chains

and throw off their shackles.”

The One enthroned in heaven laughs;

the Lord scoffs at them.

The emphasis was hers, not mine. She misses the fundamental key to reading any text from the Word of God. The center is not us; it isn’t our leaders; it certainly isn’t Trump, but Christ and Christ alone. To read the Word this way is to virtually guarantee that you will read it wrong. You will read yourself or your desires or your political party into the text and pervert it at its core.

She really hits her stride when she quotes Ephesians 6:12, which reads,

Here she has unabashedly aligned the struggle of the faithful and persecuted children of God (to whom St. Paul is writing in these verses) with the platform of President Trump. He then becomes a suffering servant who struggles on our behalf. This doesn’t even make sense from the text of Scripture. In fact, Paula White’s very use of this text could be used as an example of such a scheming attack of the devil and a force of evil in the lives of God’s children.

At some point it is ridiculous to even keep straight who Trump is running against. She declares that he will overcome “every strategy form hell and every strategy from the enemy.” Which I suppose is the Democratic party? Really?

Over an again she equates the role of our Lord and Savior Jesus Christ with the President of the United States (well, this particular President). The division between the right and left hand kingdom is gone and political parties have captured the Word of God for their own benefit. Perhaps the worst part is that she seems to really believe this nonsense. And so do a lot of others.

Now look, I sort of like my president. I’ll most likely vote for him in 2020. But please, for the love of God, can we all stop listening to Paula White?