When you go to a church, not just this church but really any church, you enter a place that is intentionally designed and laid out for a specific purpose. There are places to sit, these days padded pews or even chairs that are designed to keep you engaged and comfortable but not drowsy. There are the places where music is played and where the word is preached. There may or may not be various symbols of the faith in a church, there to give the wandering eyes something to focus on. Often times there is a large cross that serves as a focal point. There could be screens upon which images are projected that are used to help convey the message and set the mood, to keep the hearers up to speed on what is coming next. We have things like air conditioning for the warms summer days and heaters to keep us toasty during the winter. All in all, church is something we’ve come to see as a comfortable, predictable, reliable place—something that is well established and controlled.

END_OF_DOCUMENT_TOKEN_TO_BE_REPLACED

A scream. A squirm. A cute little smile. A toy car flies right over grandma Margo’s reverent head. Teaching little children to sit in church is one of the most frustrating experiences a parent may ever have. I know. I’ve done it a few times.

END_OF_DOCUMENT_TOKEN_TO_BE_REPLACED

Around Thanksgiving I had to had surgery and I was wildly anxious.

I had known for about a month that surgery was probably going to be my only treatment option, but when I went in for my surgical consult on a Wednesday and they told me to come back for surgery on Monday, I panicked.

END_OF_DOCUMENT_TOKEN_TO_BE_REPLACED

“What do you want to be when you grow up?” Her eyes sparkled and grew a little bigger. Focusing into the future, somewhere beyond our present conversation, she released her hopeful dreams from within. I could see the inspiration of tomorrow lifting every little bit of her countenance. There in her mind she could imagine herself, in the best way, part of a world and an identity that she longed to see. Every so often you might be so privileged to see this glimmer of excitement in a child’s life. Every so often you might be so blessed to witness a moment of inspiration.

END_OF_DOCUMENT_TOKEN_TO_BE_REPLACED 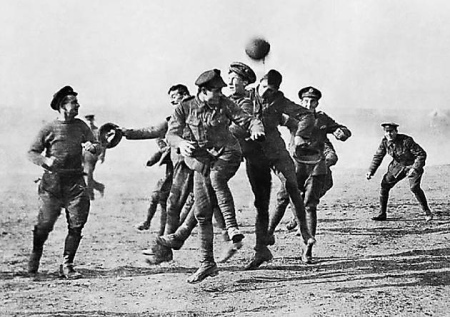 By now most of you have heard the heartwarming story of the Great War’s spontaneous Christmas Truce in 1914.  Apparently on December 24th and 25th thousands of soldiers stopped their fighting and crossed no man’s land to enjoy Christmas carols, presents, and even a little soccer with the enemy.

END_OF_DOCUMENT_TOKEN_TO_BE_REPLACED

At its core, the Christian faith is offensive. That’s not to say it’s crass or rude, though I suppose it could be. Rather, it is decidedly at odds with the ebb and flow of the ways of the world. Though we may like to play nice, to try and act just like everyone else, the truth is, to repent and believe the good news of Jesus Christ is to offend much that is held sacred by our world. We can’t just get along with everyone else, to confess that we believe one particular thing is to say the we reject those things that are in opposition to such a confession. And the things that you confess have plenty of opposition. To confess that there is no other name under heaven by which men are saved is to say that those who look to other gods for comfort and security and salvation are on a fool’s errand, it also means that those who would have you find security in your own wisdom or strength or good works are to be rejected. To confess salvation in Christ alone is a narrow and offensive thing.

END_OF_DOCUMENT_TOKEN_TO_BE_REPLACED

The house was decorated for Christmas. Santa Claus figurines, branches of evergreen, and ceramic angels were sitting on every table, shelf, and mantel. The mighty Christmas tree stood in the corner with bright greens, yellows, reds, blues, and purples lighting up the warm house while the snow fell outside.

END_OF_DOCUMENT_TOKEN_TO_BE_REPLACED

The Jagged Word
Blog at WordPress.com.