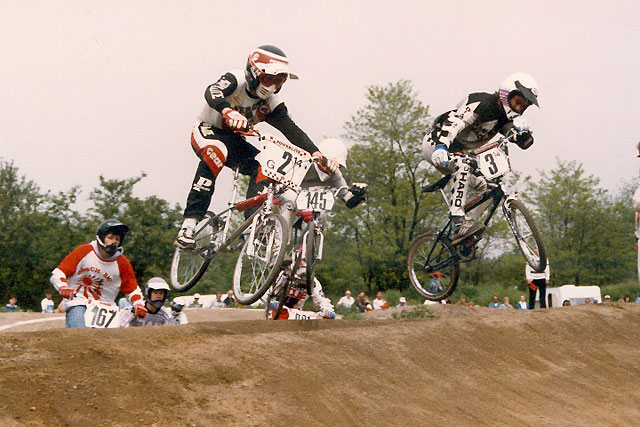 I grew up in Palmdale, California. Palmdale is in the High Desert and that desert surrounded my house. When I was growing up, there was not much to do in Palmdale.

Though there was not much to do, the desert did provide us with some fun. My friends and I would build forts, play soldier, chase snakes and lizards, light things on fire (this turned bad more than once), and get into trouble while mom wasn’t looking. There was also Tarzan Hills in the desert across from my house right next to the Elks Lodge. Tarzan Hills was an impromptu BMX track made by the older cool kids. They would go out there every day riding, racing, and jumping. To me, they looked to be truly free, and they flaunted their freedom in front of me every day. I was jealous! I wanted a shiny new BMX bike! I wanted to ride Tarzan Hills like a free man too!

My problem was that I was only eleven (I think) and still had a kid bike. Luckily enough, I went to school in Lancaster, and in Lancaster there was an honest to goodness bike shop (sadly I don’t recall the name of the shop) with real BMX bikes. I wanted one. My school, Grace Lutheran, was just two blocks from said bike shop. So I hatched a plan.

I noticed that every day when our teacher, Mr. P., would let us out for recess, he would never come outside with us. Instead, he would sit at his desk and read his newspaper; I’m sure enjoying a few well deserved moments of peace and quiet. What this meant to me was that I was unsupervised for a full 45 minutes a day.

My plan was simple. On Fridays, my best friend Justin DeBoer and I would leave the school campus at recess and walk to the bike shop. My plan was to pick out the perfect bike, then casually work the idea of the bike into my Mom’s subconscious as the perfect Christmas present, and walla!, I’d have a new BMX bike for Christmas.

You may ask: Why Friday? Friday was hot lunch day, and I could ask my mom for some money to buy hot lunch. But, instead of buying hot lunch, Justin and I could take the money and stop at Der Wienerschnitzel and eat a chili dog and fries before making our way back to school. Yes, it was a brilliant plan! Yes, I was, and am––as my Grandmother used to say––a little shit!!

So, Justin and I did it, not once, but four times. We spent four glorious Fridays at recess looking at bikes and scarfing chili dogs and fries. I found the bike I wanted, a beautiful gold and black Redline with pads to match. It was bitchin! Better yet, to my knowledge, Mr. P. was none the wiser. To this day I wonder how he never discovered our nefarious deeds; I’m sure we smelled of chili dogs and lies.

What my eleven-year-old mastermind brain didn’t account for was my Mom’s ability to sniff out when I was full of shit. The minute I told her about the sweet black and gold Redline at the bike shop, she asked a very pertinent questions: “How do you know about this bike? I’ve never taken you to that bike shop.” Crap, why didn’t I see that one coming? I may have been a mastermind, but I was not that quick on my feet. Every excuse fell short. In the end, I had to cop to my four glorious outings with Justin to the bike shop.

Mom didn’t have much of a reaction. She just said, “You’re a little young to be ditching school. Heck, I didn’t ditch school until I could drive.” My position was precarious. It was clear that she wasn’t livid, but it also seemed clear I didn’t deserve a bike for Christmas. So I waited, not hoping, and pretty much sure that the bike thing was not going to happen. Mom never said another word.

I woke up on Christmas day expecting to have a great Christmas (my Mom can always be counted on to do Christmas right), but not expecting my gold and black beauty. As I approached the living room on that Christmas morning, I didn’t see the normal pile of small presents under the tree. Instead, I saw one big lump of wrapping paper next to the tree; and I immediately knew what it was. It was my beautiful bike!

I wasted no time. As soon as we had the go ahead––after stockings of course––I tore into that paper and revealed the most wonderful thing I had, to that point in life, ever seen. There before me was my black and gold beauty. I didn’t deserve it––in fact I probably deserved to be grounded instead––but there it was in all of its glory, and it was mine!

I pulled on a sweatshirt (hoodie to you kiddos), some jeans and my Vans, and I rode that bike out the front door. First stop, Tarzan Hills for some jumping. Second stop, Justin’s house. Third stop, Grandma’s house. After that, no more stopping, just riding and riding some more. I rode the heck out of the bike. Together we jumped and soared, crashed and burned, rode and raced. But most of all, my Mom’s grace to me had given me the gift of freedom.

Grace is like that. In Lutheran theology, we say that Grace is an attitude on the part of God whereby He no longer sees us as enemies and Law breakers. Rather, by grace on account of Christ and for the sake of Christ, He sees us as His own precious children. On account of Christ and by His grace, He showers us with His mercy, riches, freedom, and every good gift, which we do not deserve. In fact, we deserve the opposite. We deserve His wrath and anger.

His gift of mercy, freedom, and salvation is so great that we who have received these gifts can’t help but share the message. Just as I could not help but ride my bike. Wonderful gifts are like that. The wonder of the gift itself is what motivates us to exercise the gift and share it with others.

Grace is getting the opposite of what you deserve on account of Christ. I believe that there are analogies of God’s grace with which He gifts us in our everyday lives. These analogies are not just like God’s grace, nor are they unlike it. Rather, they are analogies to it. They may even help us to recognize grace when we first see it.

For me, I can say that my Black and Gold Redline bike, which I did not deserve, reminds me every day, in a small way, of the ultimate gift that I have in God’s grace on account of Christ! Thanks Mom for the gift of graciousness that just keeps on giving.

I wrote this blog at around 7:30 am on Friday, November 13, 2015. My mother texted me at 7:28 pm on that same day to tell me that Justin had been found dead in his home. I am devastated. Justin lived a hard life and was by all accounts a broken man. I live in the sure hope of the resurrection of the dead; that my God is the God of the broken and that Justin was baptized into Christ. My prayers for comfort go out to his mother Pam and his entire family.