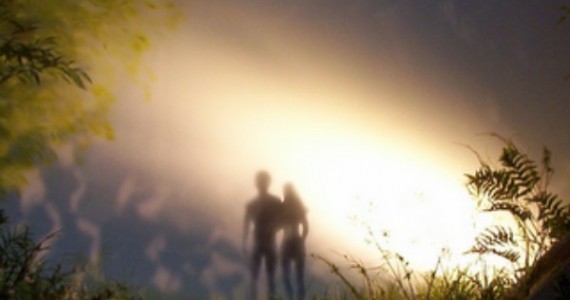 Both Adam and his wife shudder in fear. They have both eaten the forbidden fruit now. The first bite was great, but the bitter aftertaste was unlike anything they ever had. Cowering deep in the bushes they feel nauseous from embarrassment and shame. Something is terribly different and dreadfully wrong. Instead of running into the arms of their protective Creator, all they want to do was scamper away. Far, far away. Unexpectedly, this taste of knowledge and freedom was very bad.

But this tragic story took a beautiful turn when we weren’t even watching. Even though they brought this twisted situation upon themselves, He didn’t leave the wretched creatures to die. He found them cowering deep in the bushes. While both Adam and his wife were hiding in shame, their loving Father called to them.

He finds woman and the man in the Garden and fought back for the identity of His people. They were not an abomination outside of His salvation and love. God proclaimed that this woman and man were created to be something special, beyond what any creature could destroy. There were consequences for the broken relationship, yes, but there is a resolution to this problem on the horizon. There will be a solution to the lacking love and terrible mistrust. There will be a permanent reconciliation between the Creator and His creations. God called to them and gave them a simple, life-changing promise.

God spoke the first Gospel message to this desolate couple. There was good news given in the midst of their sin. God told the evil serpent that man and woman would have a child that would dash his head to pieces. Now, the Lord was not simply speaking to a slimy beast gone bad. God revealed a much bigger reality in His now broken world. Satan will be defeated. Satan will be crushed. There will be no crafty snake in God’s restored creation. Our terrible decisions cannot separate us from God and His gifts. Without the enemy Satan and the consequences of sin, we are left with the simple recollection of His Garden of gifts. Even in the depths of their disobedience, God loved His creatures so much, that He gave them a glimpse of this victory. There is forgiveness, right from the beginning. God gave a word that He will reverse all that man and woman had done.

The air is cooler in the Garden, now. The sun descends behind a withering tree. As the newly dead leaves float silently back to the dust of the earth, the shadow of God passes over His Garden. Two snow-white lambs scream. And they lay silent and motionless before their Creator. He gently lifts up the lifeless skins, and covers the naked shame of man and woman.

“And the Lord God made for Adam and for his wife garments of skins and clothed them.” (Genesis 3:21)

God hides their sin with this first blood sacrifice. Throughout the history of God’s people, a sacrifice for sin covered the wrongdoings and made people acceptable again to God. Foreshadowing the Hero to come, God kills, sheds blood, and His people are reconciled to him. Here in the Garden, God provides that same story of restoration. This sweet story prepares us to see the even more complete sacrifice on Good Friday that covers the naked shame of the whole world.

Alleluia, Christ is risen indeed! The serpent in the Garden has been crushed! On Easter morning, Christ breathes out a long-awaited story of life from Eden. His resurrection is a foretaste of your life in the everlasting good Garden. On account of Christ, this is your story.