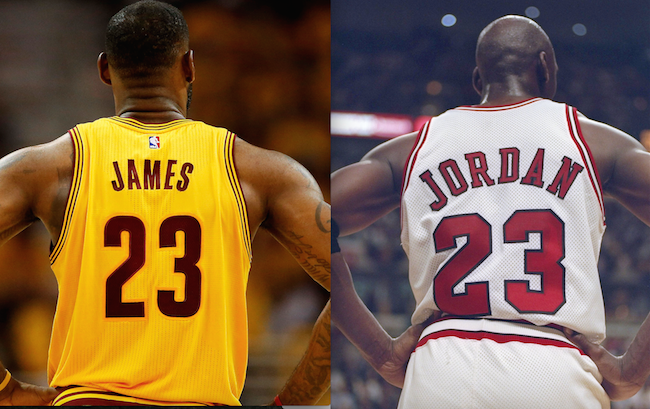 Michael Jordan resides on LeBron James’ back. There he hangs heavy, always whispering into LeBron’s ear: “I am undefeated in the Finals. You have a losing record! Who cares if you’ve made more Finals than I have? I have enough rings to start onto the second hand! You’ll never catch me!” Jordan is LeBron’s accuser. He refuses to let go of LeBron. He refuses to get off his back.

Now, I don’t know if Jordan wants to be a weight LeBron must carry around, but no one in the sports media seems all that ready to let LeBron forget that MJ’s there. After losing to Golden State this past week, the sports tribunal once again found itself putting LeBron’s career on trial. They woke up the tired comparison-with-Michael Jordan conversation and began to compare statistics and post-season record, on and off the floor personas, and heart and drive to win. Even if LeBron wins three or four more championships, the trouble is that he will never be free of Jordan. Jordan will always be the standard to whom he will be compared. LeBron is easily the best player we’ve seen since the Jordan era (not so fast, Kobe). That means he’s condemned to be compared with Jordan. And in this comparison, LeBron simply cannot win.

Never mind that James averaged a triple-double against that All-Star roster in Golden State. Never mind that he has led his respective teams to the Finals for seven (!) straight seasons. Never mind any of it. Even if he does win three or four more, he will still be judged for having more losses in the Finals than Jordan. “I never lost a single Finals series I was in,” Jordan will whisper in LeBron’s ear. No matter how well he performs, no matter how many championships he wins, no matter what he does, LeBron will always have Jordan on his back.

It seems to me that since there is nothing LeBron can do to remove Jordan from his back nor silence his judges, the only way the Jordan standard will ever cease to condemn LeBron is for Jordan to speak up and endorse LeBron. That is, the only way for LeBron’s career to be considered as good as Jordan’s, if not better, is for Jordan himself to leap off of LeBron’s back and declare, “You are better than me. This conversation is absurd. I think LeBron could take me. Compare our numbers in our prime; they’re competitive. But I declare LeBron to be better than me.” Jordan would not only be off of LeBron’s back; he’d have given LeBron the trump card to silence his critics.

Now, for Jordan to ever utter such words would be an absolute miracle. Can you imagine his Royal Airness, the epitome of heartless competitiveness and pride, coming out and saying something like that? It would require Jordan to sacrifice his pride and his reputation as the best of all time. He would have to silence that voice in his head that would never allow him to be second best. It would practically kill Jordan as we know him, but LeBron would be free. Even if LeBron’s media accusers would not accept Jordan’s words, even if they continued to judge and compare, LeBron could always say, “I hear your accusations, but what of them? The man himself has declared me to be better.”

The only way LeBron will ever be free of Jordan is if ol’ Mike jumps off LeBron’s back, sacrifices his reputation, and declares LeBron to be better. Then and only then would LeBron be able to silence his accusers. Only then would he show that his career is justified, at least in the eyes of the only judge whose opinion matters in the conversation: Michael Jordan. Obviously, LeBron cannot do enough to justify his career to his accusers. It will take a word from the outside to end the judgment. But until Jordan graciously speaks up, we’ll continue to see LeBron condemned to comparison.