The Reformation was firmly ensconced in the German lands and began to move to other countries. It even reached France. In 1534, Melanchthon was invited to France to defend the Lutheran position to King Francis, who seemed to favor the Reformation. Melanchthon responded that he would do what was within his power for the sake of true religion (CR: 2, 739). Melanchthon expressed a fond willingness to accept the invitation, though John Fredrick, his elector, refused to grant him leave to go. The refusal of permission to travel did not stop Melanchthon from keeping up correspondences with interested parties in France.

At nearly the same time that Melanchthon parlayed with Henry VIII, Francis I of France set in motion an attempt to make an agreement with the Smalcaldic League––a band of allied German city states who have embraced the Reformation and political reform––in opposition to Emperor Charles V. The well-known Melanchthon Scholar Timothy Wengert notes in his work Law and Gospel: “For such an alliance to occur, the prior problem of religious divisions needed to be addressed” (Wengert, 202).

The Importance of France

Jean de Bellay was bishop of Paris, and his brother Guillaume served him as an official envoy of the Church. Melanchthon maintained discussions and correspondence with Guillaume for many years. Guillame was also dispatched to Germany, where he established a relationship with Martin Bucer, another German Reformer. In the summer of 1534, Guillame established contact with Melanchthon, and the two set out to work out their theological differences. Melanchthon’s discussions with Guillame resulted in his composing of a theological opinion which contributed to the evolution of his doctrine of good works in the 1535 Loci Communes. Melanchthon opened their conversations by sending his opinions to Guillame in a letter in August of 1534 (CR 2: 741-745).

H. Pershing notes that Melanchthon stood quite firm on the issues of justification and the necessity and merit of good works, since, in his mind, they all agreed that no one could keep the Law perfectly. Pershing says:

On the doctrine of justification, he stated that time had led to a closer agreement than had formerly existed. The absurd teaching of the scholastics that men merit the remission of sins on the basis of their good works was nowhere believed any longer. All now confessed that fides was necessary. This he defined as fiducia in Christum et remissionem peccatorum. (CR 2: 747) Of this fides or fiducia that scholastics made no mention.

There was already agreement among the doctors both Catholic and Protestant on freedom of the will, the origin of sin, the remission of sins, and good works. This degree of agreement already existing should insure the success of such a colloquium as was proposed.

It was evident to all that for the remission of sins there should be contritio and a change of habits. This remission depends on the mercy and passion of Christ which is apprehended fides, that is, fiducia.

Reconciliation of divergent views on the worth of good works would be easier since all now agreed that it was impossible to keep the law on all points. Good works do not please God because of their merits but because those who do them believe in Christ. (Pershing) 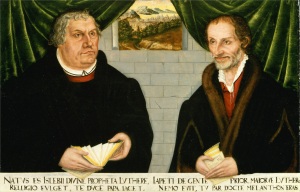 The issues that Pershing seems to pass up so quickly seem to be the issues at hand. Is there agreement on justification, sin, and the freedom of the will? Are works necessary or meritorious? If so, how and in what way? It seemed at the outset that Melanchthon’s presuppositions on entering talks with the French might soon lead to trouble. Timothy Wengert notes that in these discussions, Melanchthon claims: “a righteousness of good works or of a good conscience is necessary” (CR 2:749/50).

Thus, trouble does follow. And so, the stage is set. As this line of thinking progresses in Melanchthon, he became more and more willing to express good works, not just as a necessity but also as “necessary to salvation.” The question then became that if this is the case, what did he mean by this statement and in what context did he use such a theological formulation? If we are to take him at his word as expressed by the locus on the doctrine of good works in the 1535 edition of the Loci Communes, he means that they are necessary because they necessarily flow from the life of the justified Christian. Yet, this formulation is troubling, as has been shown in earlier articles, and haunts him for some time.