The story of our Lord’s baptism in the Jordan River is one of my all time favorite texts from Holy Scripture. This is the text that begins our Lord’s public ministry. It is here in these waters that he makes the definitive step from being Jesus born of Mary to the Savior anointed by God to redeem all of mankind. It is an exciting and dramatic moment full of intrigue and drama that we don’t want to miss out on. In fact, I believe that in this simple and short text we find the very heart of our hope and confidence as the children of God. For this isn’t just some quaint history lesson, but a record of how it is that our Lord atones for our sins. This contains our assurance to endure as brothers and sisters in Christ.

So, what happens in this great text? Well, we are told that John appears “baptizing in the wilderness and proclaiming a baptism of repentance for the forgiveness of sins.” This is John the Baptist dong what he was born to do. He is preparing the way of the Lord by baptizing people. They come out to him, and we are told that a lot of people from the region of Judea and Jerusalem were doing just that. They are washed in the waters of the Jordan river. This washing was a symbolic act contrition and desire to change they way they think and act. This is what it is to repent, to confess that your actions are sinful. This is how you desired to do better, to be more faithful, more diligent, more righteous in your actions. And as a sign of such contrition, you would receive this ceremonial washing. This washing of repentance was a sign of God forgiveness and welcome for you.

Presumably then, this washing was a ritual act that could be repeated when you stumbled and fell, and when the guilt of sin overcame you yet again. Confessing your failure, you would return to John to start again the life of a faithful child of God. You would cling to the washing and keep your eyes focused on the promises that he pointed towards. See, John was not just some ordinary guy out there washing people in a river. No, he was clothed with camel’s hair and wore a leather belt and ate locusts and wild honey. This was a man who lived and dressed like the great prophet of God. His clothing is the same as that of the great Elijah, and his choice of food separated him from the rest of society. He wasn’t there to just be one of the fellowship but to point to something greater. So, as they came and were washed by him, he would declare, “After me comes he who is mightier than I, the strap of whose sandals I am not worthy to stoop down and untie. I have baptized you with water, but he will baptize you with the Holy Spirit.”

In other words, John is not just there to proclaim forgiveness to the repentant sinners. No, he is there to point them to someone greater. He is there to direct all the eyes of the world to our Lord Jesus Christ. And so, it is into this scene, this historical setting, that our Lord arrives from Nazareth of Galilee. And it is what plays out next that makes this text such a big deal for us today. See, when Jesus gets to John, he does the most shocking and bold thing imaginable. When he gets to the Baptizer, he actually gets in the water and is baptized by him. Now, at first glance we might say, well of course he’s being baptized. That’s why people go out to John in the first place! What’s the big deal? The big deal is that this baptism was for those who were repentant sinners. It was for those who came consumed by sin and guilt and desired the forgiveness of God. So why is Jesus in the water? Why is the sinless one, the perfect one, the one born without sin being baptized? What sins could he possibly be confessing? What wrongs does he repent of?

Well I’ll tell you what he is repenting of. He’s repenting of the time that he gossiped about another. You know what I mean, he had good intentions, he wanted to offer some constructive criticism but instead he destroyed that man’s reputation among his coworkers. And of course, he is there for all the times when he acted out of selfish pride, the times when he moved through his life as if he matter most, the times when he hurt and wounded those that he ought to have loved, the times when he encouraged those who ought to have been restrained in some way. He confesses the time he aborted a child, and the time he lusted though he knew it was wrong. He repents of alcoholism and pornography and being silent when a brother needed his words of kindness and forgiveness. He dips his head beneath the waters of the Jordan River to repent of his bigotry and his misguided assumptions of what is good and right and holy. He confesses there his failures as a father who fails to care for his own family and a wife who holds a grudge against her husband.

See, he doesn’t go there to have his sins cleansed, but to repent for your sins. He goes not to get rid of sin but to take them up. He who knew no sin becomes sin for you. Here in these waters he repents of the sins of the world, the same sins that he will bear in his flesh to the cross of Calvary. For it is these sins that demand his life. After all, the wages of sin is death. So the Son of God clothed now in your sin must die. This is how the justice of God is fulfilled. This is why it took the Word of God himself to set you free from sin, death and the power of the devil. Therefore St. Paul will say of your baptism,

Do you not know that all of us who have been baptized into Christ Jesus were baptized into his death? We were buried therefore with him by baptism into death, in order that, just as Christ was raised from the dead by the glory of the Father, we too might walk in newness of life.” (Rom. 6:3-4)

When you received the gift of Holy Baptism it is not what John was doing at the Jordan. It isn’t a washing of repentance but of regeneration. It isn’t a ritual that must be done over and again to cleanse the conscience. But it is a one time, complete and whole connection to the one who repented, suffered and died for your sins. No part of your salvation has been left outside of Christ. He alone has taken care of it all. He alone has opened to you the way of life everlasting. 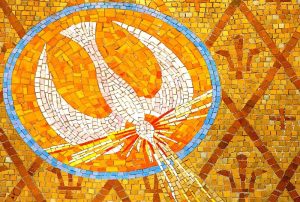 And to drive home this very point, notice what happens as Jesus comes up out of the water. Immediately the heavens open up and the Spirit of God descends upon our Lord like a dove. Literally, the text there says that the heavens rend or split open, they tear apart. For a moment, for this moment, this time when Jesus repents for the sins of world, the heavens tear open. The separation between God and mankind is torn. And the Spirit of God comes down. Now Jesus is rightly called the Christ, which means the Anointed One and this is the moment of his anointing. In the Hebrew language, the Anointed One is translated “Messiah”. And so here at our Lord’s baptism, God the Father rends the heavens to anoint his Son.

It is no mistake that Mark tells us the heavens rend at the baptism of our Lord; for it won’t be the only time he speaks of this. Again, in chapter 15, as our Lord hangs upon the cross to die for the sins he repents of, we hear him cry out “My God, my God, why have you forsaken me?” When he had breathed his last, the curtain of the temple was torn in two, from top to bottom. It is this same word. The curtain that separated the people of God from the Holy of Holies was torn or split or rent, when he died for your sins.

Christ your Lord is the way, the truth, and the life. The way through this vale of tears, through this life of sin and temptation and failure, to the very gates of paradise itself. He has repented of your sin. He has called you by name. He has washed you and declared you to be an heir of eternal life. And as the heavens rend, we hear the voice of the Father himself. And what is it that we hear Him say? He says to His anointed Son, to the one who bears your sins and clothes you with His righteousness, He says to him, “You are my beloved Son; with you I am well pleased.”

This work is the pleasure of God. This sacrifice and restoration, the defeat of the devil and the promise of eternal life, this is the joy of God. Which means, my brothers and sisters, you are the joy of God. His beloved, His saints, His children.