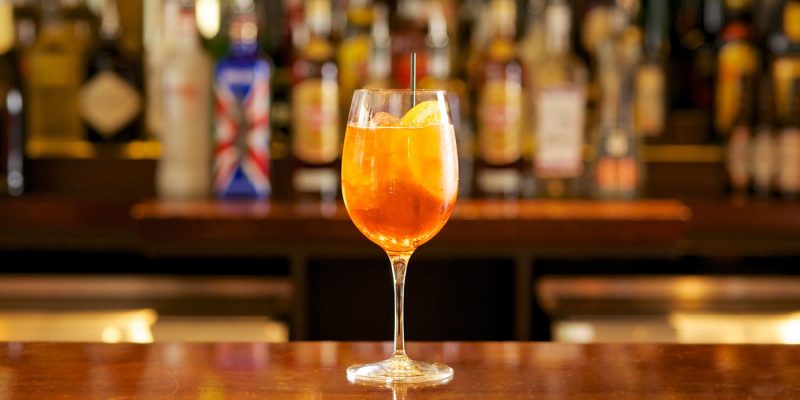 Our recent family trip to Europe cemented this reality in my mind – whether traveling through Europe, the Middle East, or the Orient, cocktails are far more of a rarity than here in the US. But one cocktail advertised heavily throughout the many countries we passed through in Europe is the Aperol Spritz – sometimes just referred to as a Spritz. We loved it there as a refreshing and light drink in the midst of a hot day of sightseeing. We continue to enjoy it now that we’re home, despite the fact that it’s not a very common drink in the US.

Combine the ingredients over ice and stir.

Aperol originated in Italy early in the 20th century but took a while to catch on.  It was developed as a before-dinner drink (aperitif), designed to stimulate gastric juices in anticipation of food. It has a bitter orange base but also includes rhubarb and several botanicals. It is lighter, sweeter, and has half the alcohol content of Campari, a close cousin. You can purchase Aperol at a well-stocked liquor store, but likely won’t find it in the average supermarket liquor section.

Prosecco is an Italian white wine.  Generally it is thought of as a sparkling wine and a cheap alternative to champagne, but there are still (non-bubbly) versions of Prosecco as well. While wine referred to as Prosecco is referenced as far back as the 16th century, it is likely the wine has been produced far longer under different names, with Roman historian Pliny the Elder praising Italian wines from the regions associated with Prosecco for their health benefits.  It is generally served chilled. Trader Joe’s has two very tasty (and inexpensive) Prosecco options, or you can purchase better pedigreed Prosecco at a good wine or liquor shop.

The drink has a light, slightly fruity taste and the  sweetness is very well balanced by the bitterness inherent in the Aperol. It’s a pretty drink (I serve it in a wine glass, though a champagne flute could also be used), and it really is very refreshing when the weather heats up. Enjoy!