At its core, the Christian faith is offensive. That’s not to say it’s crass or rude, though I suppose it could be. Rather, it is decidedly at odds with the ebb and flow of the ways of the world. Though we may like to play nice, to try and act just like everyone else, the truth is, to repent and believe the good news of Jesus Christ is to offend much that is held sacred by our world. We can’t just get along with everyone else, to confess that we believe one particular thing is to say the we reject those things that are in opposition to such a confession. And the things that you confess have plenty of opposition. To confess that there is no other name under heaven by which men are saved is to say that those who look to other gods for comfort and security and salvation are on a fool’s errand, it also means that those who would have you find security in your own wisdom or strength or good works are to be rejected. To confess salvation in Christ alone is a narrow and offensive thing.

Now, of course to say that the Christian faith offends other religions ought to be obvious to everyone, but it also offends those who would add things to the necessity of salvation that are not Christ alone, such as how you live your life. In other words, this confession that we are saved by grace alone through faith alone in Christ alone is offensive to ourselves. It wounds your pride, your desire to justify yourself. There is a constant temptation within the church to add to the exclusive claims of Christ so as to make it a little less offensive. Sure, Christ is the source of your salvation, but you still need to commit yourself to him you need to talk the talk and walk the walk. You need to pray, read your bible, and volunteer to help your neighbor. In so doing, you distinguish yourself as being worthy of such a gift. If you do these things then perhaps it wouldn’t be as offensive. Perhaps they wouldn’t call us hypocrites anymore.

But we ought to admit that laying at the heart of the offensiveness of our faith is none other than Mary, the mother of our Lord herself. This young girl who found favor in the eyes of God is elected to be the one to carry in her womb the savior of mankind. The thing is, she isn’t the one we might expect to be in such a position. She isn’t a great leader of the faithful. She isn’t some royal personage who would rightly bear the King of kings. No, she is unknown to us and the rest of the world outside of this moment. For some reason completely unknown to us, she has found favor with God and will conceive by the Holy Spirit and give birth to the one who will save people from their sins. Her obscurity and humanity only add to the offensive claims of our faith.

So, you all know the story, right? You know about the angel Gabriel making the great announcement to Mary. You know about the vision telling Joseph not to divorce her for she will bear a son and he will call his name Jesus because he will save his people from their sins. And you know that Mary had a relative named Elizabeth who was also pregnant though she was quite old, and the child she carried was none other than John the Baptist. So, our text today has Mary heading off to visit Elizabeth. And when these two women greet each other the child within Elizabeth leaps and Elizabeth proclaims, “Blessed are you among women, and blessed is the fruit of your womb! And why is this granted to me that the mother of my Lord should come to me” (Luke 1:42-43). Elizabeth looks at young Mary with child and declares that this is the mother of her Lord, and John the Baptist is already eager to proclaim with joy the arrival of the Lamb of God that takes away the sin of the world.

The early Greek church gave to Mary a special name that echoes the words of Elizabeth, a name that gets to the heart of the offense of our faith. They would say that Mary was Theotokos. Literally translated Theotokos means “God-bearer.” Mary was the bearer of God. Just allow that to sink in for a moment. It is difficult for me to try and describe how unique and insane this is. The child conceived within Mary was the Creator of the heavens and earth. God, all powerful, all knowing, all present, God was gestating in human flesh. The remarkable features of his creation would become his very own. Eyes and ears, a nose and mouth. God would take on human expressions, be hungry and know what it is to be cold. This unknown girl betrothed to an unknown man named Joseph was chosen to bear God so that he would save his people.

For many people, this story, this confession of Mary as the Theotokos, is simply too much. It is too demeaning for God to enter such filth and lowliness. After all, if God is greater than we are, why would he lower himself into the muck and mire of this broken and dying world? In fact, many will argue that the finite and limited things of this age cannot contain the infinite majesty of God. Therefore, this child may be special may even be our Savior, but he isn’t really God. No, to be born of Mary means he must be something less, higher than us but less than God himself. To confess that this child is God of God, light of Light, very God of very God, begotten not made is offensive to all that is God. It is too demeaning, too low, too dirty.

On the other hand, others will try to solve the offense of the Theotokos not by limiting the nature of Jesus’s divinity but by elevating the low estate of Mary. She was a woman but not like woman today, not like the woman you know in your life. She was better, more holy, more pure, perhaps even sinless. People go far beyond what Scripture teaches us about the mother of our Lord because perhaps by doing so this would all be a little less offensive. If Jesus was born not only of a virgin but a sinless one why then it wouldn’t be so bad that God was born of her. 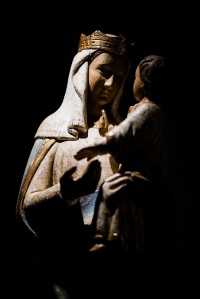 The temptation is either to lower Christ or elevate Mary to make this a little more palatable. But it is directly in this offense, directly in the heart of the tension that is found in the Theotokos that your salvation lies. The Christian confession is that true God begotten from the Father from eternity and true man, born of the Virgin Mary is our Lord. True God, to live the perfect sinless obedient life that you could never live and true man, to endure the temptations and struggles and trials of your life. True God, so that his death might cover your sins, so that his resurrection might open the gates of paradise to each and every one of you and true man, so that you might know that your punishment has been paid for. No matter how bleak your sin may be no matter how shameful your thoughts words and deeds are, he has already paid the price for them.

The good news of Jesus Christ is offensive for it is God getting dirty, getting right down into your sin so that he might save you. When God comes in the flesh all other ways to access him are clearly shut down. There is one name under heaven by which you are saved, one man who bore your sin, one God who loved your through the cross and grave and back to life again. And that is Jesus Christ born of Mary.

And here’s the really good news. He who came all those years ago continues to come even now. Born not of Mary but in with and under the gifts he’s given. He comes in the washing of Holy Baptism, he comes in the feeding of his Supper, he comes in the forgiveness of sins that echoes in your ears. Some might find it offensive that God would save you. You don’t seem worthy enough. You don’t seem to have all the right boxes checked. But let us take our cue from the Theotokos herself who “believed that there would be a fulfillment of what was spoken to her from the Lord” (Luke 1:45).

He has promised you freedom and forgiveness; he bled for it and rose for it. He will fulfill what he has spoken about you.