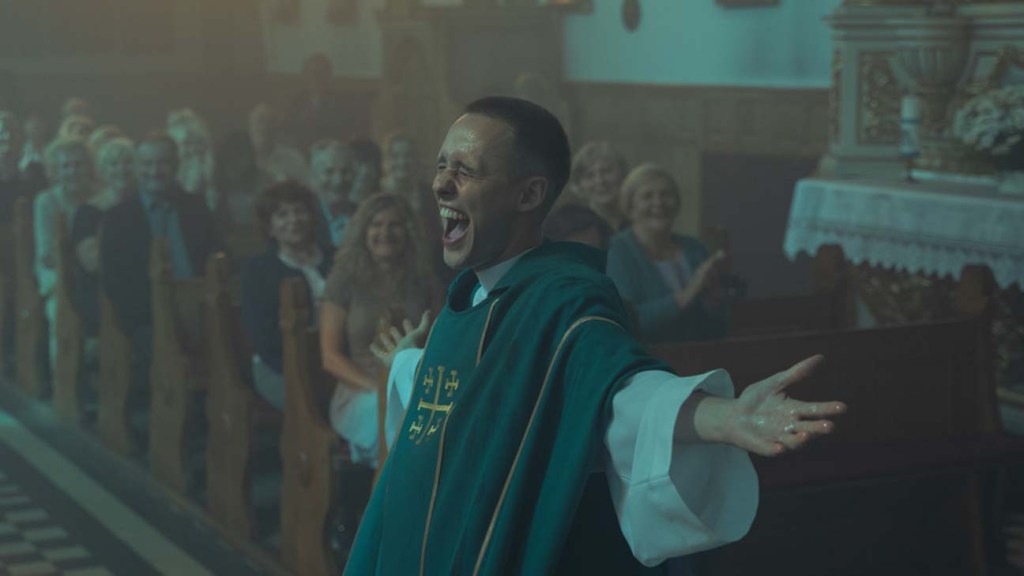 In Coronatide, more than one industry is suffering because people cannot gather together in one place. So movie theaters, especially independent or art-house theaters, are trying to figure out how to stay afloat. One way is by offering “virtual theaters” for films that otherwise would be available only in person in a theater. Last weekend, Alissa Wilkinson offered a list of films that could be watched in virtual theaters, through sites like Film Movement.

One of those films is the Polish film Corpus Christi (Boże Ciało), which was an Oscar nominee for Best International Feature, losing to Parasite. It’s a bit of moral whiplash to go from Malick’s A Hidden Life to Corpus Christi. A Hidden Life is like standing on the shore of a wide, calm, slowly moving river, while Corpus Christi is like surviving the rapids only to go over the falls.

The narrative arc itself has probably been done a thousand times: someone tells a simple lie, which leads to a misunderstanding, which leads to more lies, which leads to a deeper and deeper impersonation. All the time the character is this close to messing it up and being discovered. You know that the facade can’t last, and it eventually comes crashing down. The only question is the extent of the damage along the way.

In this case, Daniel (a skeletal and simmering Bartosz Bielenia) is released from a juvenile detention center and given a job at a sawmill in a small town, where many other parolees are also sent to work. You know from the beginning that he’s not on a good path. As he’s about to leave the detention center, the priest, Father Tomasz, asks him what he has to be when he gets to work, he answers “sober.” Immediately, however, the camera cuts to Daniel snorting cocaine and drinking, which not only leads to sex in the club’s bathroom, but to one of the most startling images in the film: Daniel, high out of his mind, his eyes impossibly wide, under pulsing strobe lights.

The next day, hung-over, after encountering an off-duty policeman who says he can always identify “scum” like Daniel, he walks through the mill without checking in, and makes his way to the town’s church. We know he wants to be a priest, but the priest at the detention center said that there was no way any seminary would accept him because of his conviction.

Sitting in the church, he is pulled into a lie by the girl sitting in front of him. She assumes he’s a parolee; out of pride, he says no, he’s a priest. She laughs at him, and says, sure, like she’s a nun. Somehow, he’s procured a clerical shirt, which he shows to her. That’s the lie that leads to her introducing him to her mother, Lidia, who takes care of all the practical details of the parish (including the drunkenness of the priest), and she brings him to the rectory. The priest is going to rehab, so he convinces Daniel to take over his duties, just for a few days, he says—which then turns into an indeterminate number of weeks.

That’s the set-up, based in rough outline on the true story of a Polish man who impersonated a priest around the time of the Feast of Corpus Christi (apparently that’s a problem in Poland?). But even though the arc of the story might seem familiar, there are layers and depths here that make this a movie I’ll think about for a while.

The contradictions in Daniel and in everyone around him are like ice floes that constantly collide and crack against each other. Early on at the detention center, Father Tomasz (from whom Daniel will later take his fake priest’s name) tells the young men that they are all priests, in contact with God through their prayers and songs (which doesn’t seem to me a very Roman notion). And although it’s never brought up again, I assume that it is that idea by which Daniel justifies, in part, the role he assumes. Clearly, Tomasz isn’t saying that he’s a priest in that sense, and when he finally finds Daniel at the end, he physically reinforces the point with a bit of violence.

It’s fascinating to watch Daniel’s character shift on two fronts: as the parolee he is, restraining (though not always successfully) himself from what he would do if he weren’t pretending to be a priest. At one point, he even tells a group of teenagers that when you become a priest, you choose to go all-in with the rules, including celibacy. On the other hand, his character develops as the priest everyone takes him for, trying to help spiritually the people of the parish.

The film is basically divided around his three sermons: the first one, which is essentially his paraphrase of Tomasz’ sermon that we see early in the film; the second, where he is obviously warming to the excitement of being the spiritual leader; and, finally, the third, which is a pretty good explanation of forgiveness, directed both at his hidden self, and at the subterranean tension in the town that he’s punctured. (In the penultimate scene, we even see the effect that his preaching of forgiveness has had on Lidia.)

The secret of the parish is the story line that intersects with Daniel’s own secrets. Along with the shifting and development of Daniel’s character, he is in a town that has truths which it—like him—doesn’t really want exposed, certainly not by an outsider. The small-town dynamics, both positive and negative, will be familiar to anyone who’s spent time in one: an underlying history, known to everyone who lives there, but rarely, if ever, explicated; the surface friendliness painted over a taciturn wariness; a strong desire to preserve the status quo, which keeps everyone comfortable in their assigned places. They might invite you in for a meal, or buy you a drink, but you’re never going to be “one of them.”

Daniel, like any young pastor arriving in a place, thinks he’s figured out what’s going on based on what a few people have said. The reality is, of course, something much more complicated. As he tries to navigate the seemingly impervious relationships already in place, it seems like he’s actually helping people, especially in their suppressed grief. But even that is not as clear-cut as it seems.

The most difficult question for me to answer is how Daniel interprets his stripping off of the cassock before the congregation. He looks at the crucifix and then holds his hands out in imitation. In what way is his imitation of a priest an imitation of Christ? It’s certainly related to his first sermon, where he speaks about imitating Jesus. How can we imitate You, who are so pure, he asks, when we bring in all this “dirt” with us? How am I supposed to act on Your behalf, when I can’t even handle my own life?

Daniel is not a Christ-figure, but a sinner coming before Christ—and although there are exhortations to Christ-likeness and forgiveness, the proclamation of the full forgiveness of Christ doesn’t actually make any appearances. In the confessional, Daniel doesn’t even absolve the woman after giving her penance!But I understand Daniel’s taking off the cassock to represent the taking off of the pretense and fraud in which he’s wrapped himself.

In the final scenes, we come all the way back around to the beginning. At first, it is Daniel who is complicit (though not active) in an assault on another inmate. In the end, Daniel is the object of Bonus’s unnamed hatred, already apparent the first time they meet in the movie. We’re given only subtle indications about how much Daniel was changed by his play-acting as priest. But during the final, stomach-turning violence (which is filmed brilliantly at toppling angles, though it’s difficult to watch), there is the resolution of one contradiction, on the part of Pinczer, as he tells Daniel, “Not you!” and pushes him out of the building.

Though Pinczer has been mocking toward Daniel, from the mass in the detention center, to the moment he discovers Daniel’s deceit, to his rejection of Daniel in the dining hall, there’s an alcohol-induced moment in the middle of the film where Pinczer weeps at how Daniel—even in his lie—seems to have found his place and is doing some good. Pinczer can’t even help his girlfriend and child, one of the reasons for his blackmail of Daniel. That vulnerability closes up fast, and stays closed, until the final moments. What’s left for us to consider is where that small grace might lead Daniel in the future.